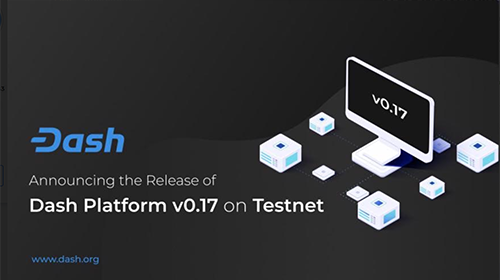 Dash Core Group (DCG) is excited to announce the release of Dash Platform v0.17 for testnet. After a successful deployment to testnet, a new version of the DashPay wallet for Android and iOS will also be released to DashPay Alpha Program users in the following days. This flagship application demonstrates the power of Dash Platform to facilitate industry-leading user experiences for cryptocurrency applications, ones that are visually indistinguishable from centralized offerings. These user experiences are facilitated by decentralized application data storage, an alternative to Amazon Web Services or Google Cloud Platform, where user data is secure and not monetized for advertising profit.

Testnet is the Dash network’s most formal testing environment, a critical stop on the path to mainnet. Releasing to testnet is important because the environment is almost 5x larger than Evonet, which provides a better opportunity to test the platform at scale. This is the biggest deployment of Dash Platform, and consequently, this release marks the most significant milestone in the realization of Dash’s long term vision for mainstream adoption. This release was made possible by the tireless efforts of DCG developers and volunteers from the community who provided a crucial feedback loop to improve on core functionality and ideate on potential use cases. In spite of a global pandemic disrupting work operations for many organizations, the various DCG teams supporting this release were able to press forward and deliver the biggest update in the history of the Dash network.

At the time of publishing, Evonet has not been updated to Dash Platform v0.17, so developers won’t need to save data in advance of any network data wipe. DCG has no plans to immediately update Evonet to v0.17. This is so we can better focus on delivering the remaining features required for a mainnet release. Plans regarding the future of Evonet will be made in another blog post.

Included below are descriptions of the most important functionality included in the v0.17 release. In addition to the work regarding code integration and deployment, these descriptions represent the majority of our efforts since the v0.16 release. Significant progress has also been made on the work described in the Upcoming Release section, which can be read further down the page.

In order to deliver this release in line with our timing commitment, DCG management deprioritized various features and allowed noncritical bugs to remain. In the coming weeks, we will be resolving bugs and working on the remaining functionality required for mainnet. Here are some of the more notable trade-offs and known issues that testnet users might encounter:

Once Dash Platform v0.17 has been deployed to testnet, the immediate next steps are to follow up with another release (v0.18) that contains support for the cryptographic verification of data being exchanged between light clients and Dash Platform. This functionality will provide some of the most crucial remaining pieces for Android and iOS applications to securely work with the platform. Specifically, this includes the work related to server side light client support, validator set rotation, and threshold signing with LLMQ’s. This work is already close to completion, so we are confident that another release will occur somewhere in late January or February 2021.

In the coming month, DCG will follow up with detailed plans for the roadmap to mainnet, as well as release schedule information around the time of the Q4 2020 Quarterly Call. In these communications, we will discuss the remaining work necessary for mainnet and our best estimates for when we think this work will be accomplished. Everyone within the organization is excited for the next several months. We believe that the technology we’re building represents an important step forward in realizing our mission. In time, Dash Platform will enable developers and businesses to deliver financial solutions that are secure, reliable, decentralized, and usable for all.

In closing, I’d like to provide an earnest thank you to the DCG developers who put in extra hours over the last month to accomplish this release. Drawing the line over what should and should not be included in any given release is a daunting task, one that requires extensive negotiation over quality, scope, and expectations. I can say with confidence that DCG developers kept user experience and security at top of mind during our planning and execution, and it is my privilege to represent their hard work. After taking some well-deserved rest to observe New Years and Orthodox Christmas, we will continue delivering new functionality with the same commitment to quality, transparency, and user experience that has defined our work for the past year. As always, DCG welcomes and appreciates any feedback, and we wish all readers a happy new year.

This website uses cookies to improve your experience while you navigate through the website. Out of these, the cookies that are categorized as necessary are stored on your browser as they are essential for the working of basic functionalities of the website. We also use third-party cookies that help us analyze and understand how you use this website. These cookies will be stored in your browser only with your consent. You also have the option to opt-out of these cookies. But opting out of some of these cookies may affect your browsing experience.
Necessary Always Enabled
Necessary cookies are absolutely essential for the website to function properly. This category only includes cookies that ensures basic functionalities and security features of the website. These cookies do not store any personal information.
SAVE & ACCEPT
65508