Securing the distributed future of money, Dash provides incentives to all stakeholders in the blockchain system to deliver the fastest and most secure digital currency in the world.

Peer-to-peer digital currency differs from traditional money in that there is no central authority responsible for monitoring supply and authenticity. Instead, the hard laws of mathematics govern supply and ensure that only legitimate owners can spend their balances. Assuming users follow recommended security practices, this makes fraudulent spending and theft almost impossible. In the absence of a central authority, each node on the network itself must come to an agreement (or consensus) on the balances of each account (or address) every few minutes. This information is then stored in a block, and irreversibly written and linked to the previous block to form a chain. This constantly updated ledger is accessible by any user of the network and is called the blockchain.

Dash builds on this simple (although somewhat unfamiliar) concept by offering users instant, private and secure transactions that are so simple, you won’t even know you are transacting on a blockchain. Anyone can participate in the network, and Dash is widely available for purchase around the world. The ingenious masternode network means sending any sum of money around the world is as simple as tapping your phone at your local store to buy groceries. Say goodbye to slow transactions, complex international account numbers and high transaction fees – Dash is digital cash!

Digital is the Cash

The book “Digital is the Cash” by Nathaniel Luz describes the evolution of money and where Dash stands in the new world of digital currencies. 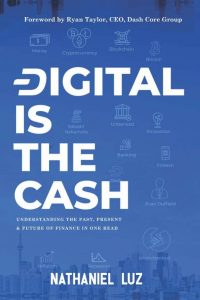 Dash is truly instant. Payments are confirmed in around a second with full security.

Dash created this special type of node on top of which all the other innovations are built.

Learn about the decentralized system of governance, funding and proposals

It's easy to begin accepting payments in Dash

Getting started for merchants

Dash’s transaction rules are identical to Bitcoin, and therefore for regulatory and compliance purposes Dash can and should be treated identically to Bitcoin.

This website uses cookies to improve your experience while you navigate through the website. Out of these, the cookies that are categorized as necessary are stored on your browser as they are essential for the working of basic functionalities of the website. We also use third-party cookies that help us analyze and understand how you use this website. These cookies will be stored in your browser only with your consent. You also have the option to opt-out of these cookies. But opting out of some of these cookies may affect your browsing experience.
Necessary Always Enabled
Necessary cookies are absolutely essential for the website to function properly. This category only includes cookies that ensures basic functionalities and security features of the website. These cookies do not store any personal information.
SAVE & ACCEPT
452