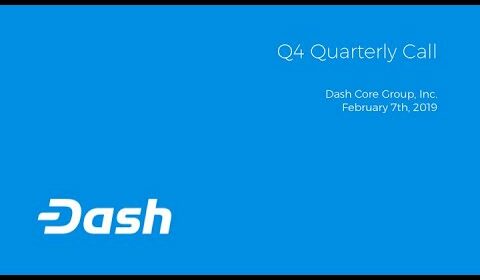 As we mentioned on yesterday’s quarterly call and in the weekly product update, we are releasing v0.13.1 of the Dash Core software in order to accelerate adoption of the Dash Core v0.13 software by improving the process by which DIP3 (Deterministic Masternode Lists) gets activated. This release goes out today.

Previously, DIP3 adoption was designed such that activation would only occur after 80% of blocks in a 4,032-block window (approximately 7 days) signal DIP3 to “lock in” the change. By default, signaling would only occur if both the miner and the masternode being rewarded were upgraded to 0.13. The reason for this setup was to avoid miners signaling deployment before enough masternodes had upgraded.

However, the unintended consequence of this setup is that the combination of the two checks in effect requires ~89% of support from both miners and masternodes at the same time, or some similarly high threshold of each population. After some internal discussion, it was agreed that this threshold is too conservative and could unnecessarily delay the activation of 0.13’s benefits. Currently, we can see that over 75% of masternodes have upgraded to Dash Core v0.13, making it safe for miners to signal DIP3 on every block. By the time 80% of miner capacity will have upgraded, we can safely assume that the percentage of upgraded masternodes will also have risen. There is also a 4,032-block activation window after DIP3 locks, allowing additional time for masternodes to upgrade, after which time masternode rewards may cease for non-upgraded nodes.

The reason why we want to release this as soon as possible is to complete the process of upgrading the network before some key dates. After the activation of DIP3, we will be able to enable spork 15. Spork 15 will drop all unregistered masternodes from the system, allowing only masternodes registered with the deterministic masternode list to be paid. Because spork 15 resets all proposal votes, it must be activated at the beginning of a voting cycle to minimize the impact and allow votes to be recast as needed for multi-month proposals. We want to activate spork 15 in early March to avoid drawing out the process and risking any unnecessary delays in delivery of Dash Core v0.14 and v1.0.

Other changes within this release include the following.

Once again we urge all network operators who have not yet done so to upgrade as soon as possible to Dash Core v0.13.

How Dash Is Being Integrated Into Everyday Transactions

This website uses cookies to improve your experience while you navigate through the website. Out of these, the cookies that are categorized as necessary are stored on your browser as they are essential for the working of basic functionalities of the website. We also use third-party cookies that help us analyze and understand how you use this website. These cookies will be stored in your browser only with your consent. You also have the option to opt-out of these cookies. But opting out of some of these cookies may affect your browsing experience.
Necessary Always Enabled
Necessary cookies are absolutely essential for the website to function properly. This category only includes cookies that ensures basic functionalities and security features of the website. These cookies do not store any personal information.
SAVE & ACCEPT
70770