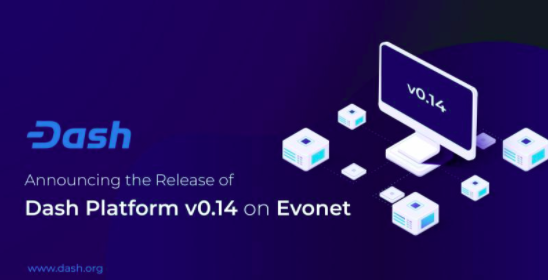 Dash Core Group is pleased to announce the release of Dash Platform v0.14. This is the 3rd release in our newly defined process, and our 5th release overall, where observers of Dash’s development can expect new functionality delivered roughly every 6 weeks. In that regard, observers can expect the next release to arrive sometime between August 25 — September 8.

As usual, due to the breaking changes introduced in this release all data on Evonet has been wiped. Developers should make adjustments to their local setups to reflect this. Below you’ll find a list of the most important updates. You can view all of the updates in greater detail by visiting the release notes for each platform component, which are included in the last section of this article.

First and foremost, I’d like to thank the platform team for their continued effort and dedication to developing and releasing Dash Platform. I’d also like to thank the other DCG developers, as well as the developers organizing on the Dash Devs Discord for their ongoing effort to improve the quality of Dash Platform. As DCG continues in our mission to deliver true digital cash, thus realizing the revolutionary potential of blockchain-based financial networks, it’s important to take a moment and celebrate the time and energy that has gone into developing this cutting-edge technology. During DCG’s Q2 Quarterly Call, we committed to delivering Dash Platform to testnet by the end of the year. After this release, observers can expect four more releases before the delivery to testnet, upon which Dash Platform will enter a new phase of its product lifecycle, one defined by growth, promotion, and use case identification.

Follow the Dash blog and social media channels for more releases and updates, and as usual, your thoughts, feedback, and pull requests are greatly appreciated.