Dash, the top digital currency for payments and e-commerce, and the longest working Staking cryptocurrency now has a new staking feature in the official Dash Wallet app.

Dash Core Group is pleased to announce that it has begun to roll out an exciting new addition to the official Dash Wallet mobile app on Android. Users can now easily create an account with staking partner CrowdNode, directly from within their Dash Wallet app in a couple of minutes.  Staying true to the decentralized values of both organizations, no personal information needs to be provided since all transactions happen to and from the same address and all aspects of the feature is visible on-chain.

Dash is the leading decentralized payment solution accepted at 150,000+ merchants in the US via DashDirect and globally at Dash accepting merchants, accessible at 6,000+ ATMs and 260+ exchanges worldwide, and the cryptocurrency that pioneered the masternode concept, which are powerful servers backed by collateral held in Dash,  designed to provide advanced services and governance on the blockchain, and which provide stable, and time proven returns to Masternode operators as a result of this activity.

CrowdNode launched their service in 2018 to pool Dash into masternodes and provide everyone the opportunity to both earn fractional masternode rewards and vote on Dash governance. CrowdNode is very transparent, the team behind it are active members of the cryptocurrency community and have been for years. Since 2022 the Dash Investment Foundation (DIF) has taken an equity stake in CrowdNode.

This new fractional masternode feature allows users to start earning income on their Dash holdings with as little as 0.5 Dash.  Users can deposit and withdraw funds instantly with CrowdNode from within the official Dash Wallet app so they can earn when they want and spend when they want. It provides real-world utility to the Dash network and value to our partners and their userbase as well.

Brian Foster, Head of Product at Dash Core Group said “As the first earning feature implemented in the Dash wallet it will help strengthen the acceptance and accessibility of Dash as the leading cryptocurrency for digital payments. There may be other Dash wallets that have earn features but I am not aware of any other wallet that you can earn AND that support InstantSend so you can immediately withdraw the Dash you need to spend it instantly.  We have additional features and improvements planned in later releases to take advantage of the many CrowdNode features that are available.”

🎕It is simple. CrowdNode takes only 15% of the rewards being generated 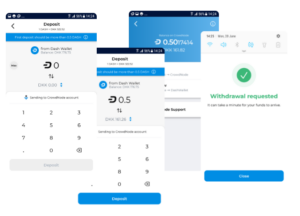 🛠 Customize how frequently you receive your rewards

🗹 Participate in Dash governance by voting on network proposals

“We are excited about the integration of our new blockchain API service into the Dash Wallet.  This partnership will drastically improve user experience, aligning with Dash’s core mission to become more accessible and user-friendly.  We are aware of the great responsibility it takes to hold peoples’ private keys.  We have spent a great amount of time in structuring how to gain the highest degree of security for our members as well as for our business.” said Andreas Rud, Founder & CEO at CrowdNode

The new Staking feature update is available for Android devices starting today and we will be rolling it out on iOS as soon as possible.

Dash is a payments-focused cryptocurrency that allows millions of individuals across the globe to carry out instant and secure transactions, with near-zero fees. It is accepted at almost 200,000 merchants globally, accessible via 6,000+ ATMs and 260+ exchanges worldwide. Dash has pioneered groundbreaking features including a two-tier network of incentivized nodes and decentralized project governance, instantly settled payments, and a fully secure blockchain. The Dash Network’s development is supported by Dash Core Group, the largest organization funded by the Dash Treasury. For more information, visit https://www.dash.org/.

CrowdNode is a shared Dash masternode service that pools members to form collaterals of 1000 Dash, so that each member can achieve fractional rewards. CrowdNode was founded in 2018 and was the first service to bring down the barrier of entry to 1 Dash, along with the ability to vote for the Dash governance system.

CrowdNode was founded in Denmark and currently operates 36 shared masternodes. During 2022 CrowdNode has been funded by the Dash DAO and the Dash Investment Foundation has received an equity stake in the company. For more information, visit https://crowdnode.io

For more information about Dash, Crowdnode and this partnership please follow us on twitter at @Dashpay and @crowdnode

This website uses cookies to improve your experience while you navigate through the website. Out of these, the cookies that are categorized as necessary are stored on your browser as they are essential for the working of basic functionalities of the website. We also use third-party cookies that help us analyze and understand how you use this website. These cookies will be stored in your browser only with your consent. You also have the option to opt-out of these cookies. But opting out of some of these cookies may affect your browsing experience.
Necessary Always Enabled
Necessary cookies are absolutely essential for the website to function properly. This category only includes cookies that ensures basic functionalities and security features of the website. These cookies do not store any personal information.
SAVE & ACCEPT
80461